In this post we take a look at the quirks of the YCC color space, it's differences from the RGB model and what are the pros of using YCC over RGB in certain applications. We take apart several images to see what is chroma subsampling, and how much information each color channel carries in an image

The components of composite video

Before we start analyzing images and the YCC color model, we need to undrstand how it is created, transmitted, and then recreated at the receiver

A composite video signal has to transmit all the information necesary to reproduce an image on the screen. It carries the brightness information, simply represented as a waveform between two chosen voltages (the black level and the white level). Timing signals such as horizontal and vertical sync, are represented as various blips below the black level, to the so called blank level. The signal is encoded line-by-line, so it only has vertical resolution.

By having the brightness and the two color channels, the receiver can convert the data to the RGB model, suitable for driving the red, green, and blue electron guns of a CRT, or the pixels on a color LCD. Since Pb and Pr were originally created by subtracting the red and blue channel from luma, reversing this operation gives the red and blue channel back. The green channel can then be calculated by subtracing R, and B from Y.

In the analogue realm, encoding the color information like that allowed black-and-white television sets to still receive and display the black-and-white part of the signal.

However the YCC color model is also widely used in the digital realm, and that's what Ill be discussing in this post... 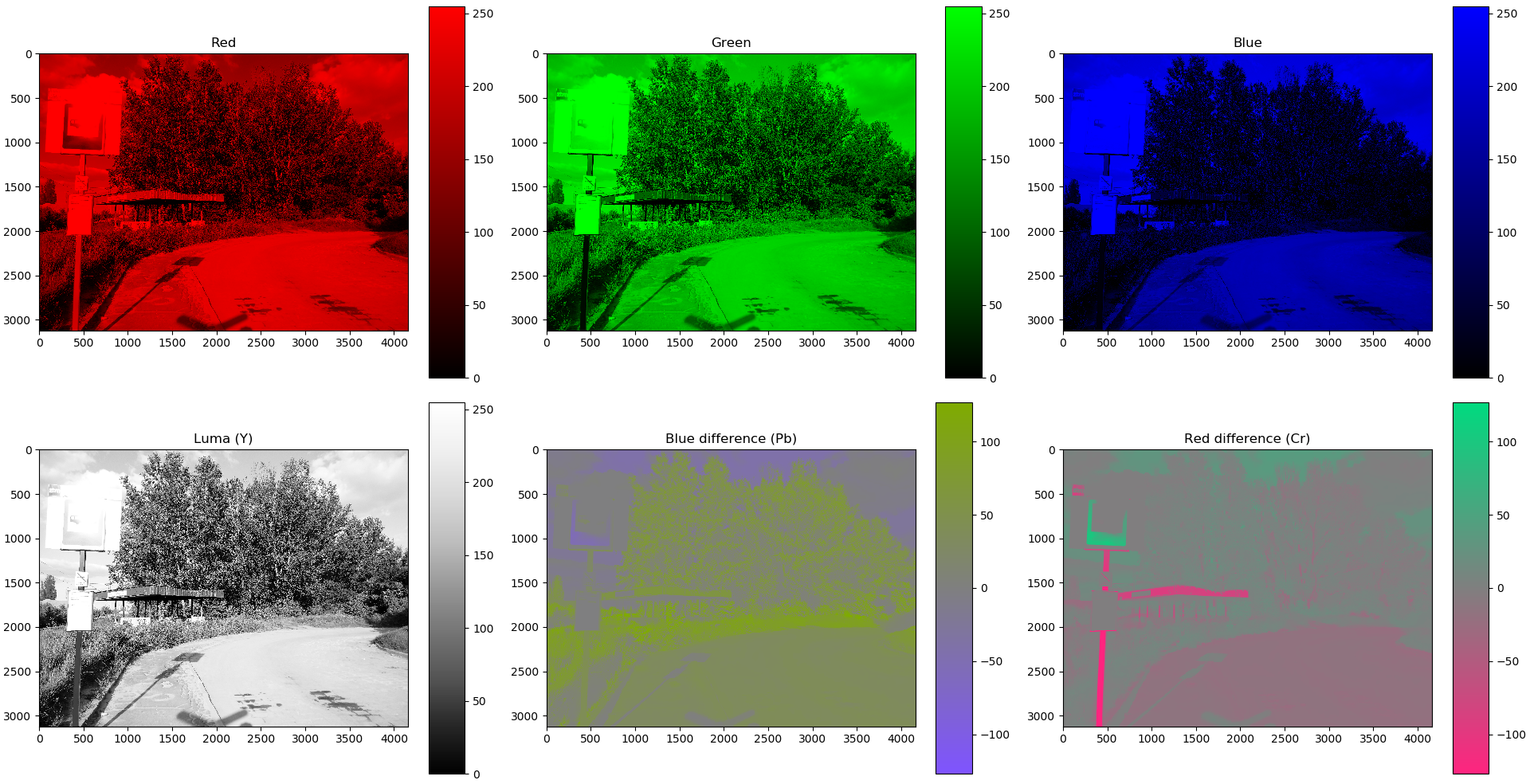 This is an example of how an RGB image is converted into YCbCr. I wrote the script some time ago in order to play with numpy and image processing. The script is available here.

To be able to easily decompose an image to look at each channel separately we need a handy little script. Fortunately the numpy library for python does an extremely good job in making this simple. Let's take a look at the code that generates the image above

First of all we need some imports. This is trivial - imageio for loading the images as numpy arrays (you can also use matplotlib.image instead, but that only supports PNG files), matplotlib for plotting, os and sys for some general script matters

Then we load the image into memory

Now that we have the imag array in the memory, we can start splitting it into R, G, and B channels. The array is 3-dimensional (the 3rd dimension being an array of 3 values - R, G and B)

Now we can extract the Luma, Cb, and Cr channels from the image

First we define the Rec. 709 coefficients for converting RGB to luma. Then we multiply each chanel by it's coefficient and sum them to get the luminance.

Pb and Pr channels are calculated by subtracting blue and red from the luma channel.

Let's take a break here and look at the Rec. 709 coefficients for a moment. Notice how the green coefficient is about 10 times bigger than the blue one. That's because human eyes are the most sensitive to green and the least sensitive to blue, and that's also why the green channel carries stunning 70% of the luminance information.

Furthermore, if you look at the above image, you will notice that the green channel is probably the clearest, of all the three. The blue image is barely recognizable, and the red is in between

The image above has had its blue channel all set to 128. As you can see it's prefectly acceptable, even though the blue information was discarded. This is how you create a trendy instagram filter ;) Looks like old fashioned colour slide film.

Another image with the blue information discarded