HOWTO set up QEMU with HAX acceleration on NetBSD

I learnt that Kamil Rytarowski has taken up a challenge of porting HAXM to NetBSD. I found this to be a great learning opportunity to learn about OS development. I decided to help him and check whether his demo of Windows 7 really works. Below are the steps I have taken to get it running.

This post is meant to be a guide on setting up HAXM accelerated QEMU on NetBSD 8.0. The HAXM-capable qemu is currently provided in pkgsrc as wip/qemu-haxm. [Not anymore. The FPUDNA fix has been integrated into HAXM.] Below are the steps needed to get all this running on your NetBSD/8.0 system. Command lines prefixed by # are executed as root, $ as regular user

You can check that in bios in most cases, or look for vmx flag in cat /proc/cpuinfo. lscpu(1) on Linux will also list that

Kernel patching is not necesary anymore, skip to building HAXM

Install src xsrc syssrc sets. This can be done during initial system installation or later. In the latter case:

Now patch the kernel source. You will need to patch one file, located in sys/arch/x86/x86/fpu.c

Now, if that patch fails for some reason, just apply it manually, its a very small change. For the record, the patch contents are below

Now that you have patched the kernel, go ahead and build it.

Should this fail, you have your old kernel backed up, strike the 5 key at the booloader and boot that instead.

Get HAXM sources and build it

You can run dmesg to verify the module was loaded correctly:

Its necesary to use wip/qemu-haxm, so prepare pkgsrc-wip. There is another patch to be applied (for the time being. I asked for git access to pkgsrc-wip and I'll push it as soon as I get my account).

The following commands will install pkgsrc-wip on your system

Build qemu-haxm with proper options. If you have previously installed qemu, use pkg_delete qemu to remove it

And re-run the script!

Use this script to create HAXM devices and VCPU nodes

It's contents are below

Get a test system image

Windows will run only as 32 bit guest for now (due to HAXM not emulating CR8 (TPR) register that Windows uses. CR8 is a new control register added in amd64 used for task prioritization. Currently, a hack ignores CR8 changes in guest). Other amd64 operating systems should be OK. Testing is necessary!!! CR8 emulation should be in HAXM soon, since some people are actively working on it.

Grab a Win 7 x86 image from Microsoft. Select any x86 Win7 and VirtualBox (any platform should do, commands below are for VirtualBox image).

This test image works very well on my quad core, 3.3GHz i3 (!) with 8 GB of RAM test box. Windows is not laggy, mouse pointer is OK, everything works like it should!

Use the commands below to get a qcow2 image

OVA file is just a tar archive, so you have to untar it to get the vmdk file. You can remove the vmdk, ovf and zip after you make sure the image works to free up space

Run qemu and enjoy your HAX

The above command line will launch the windows image with working network. Enjoy 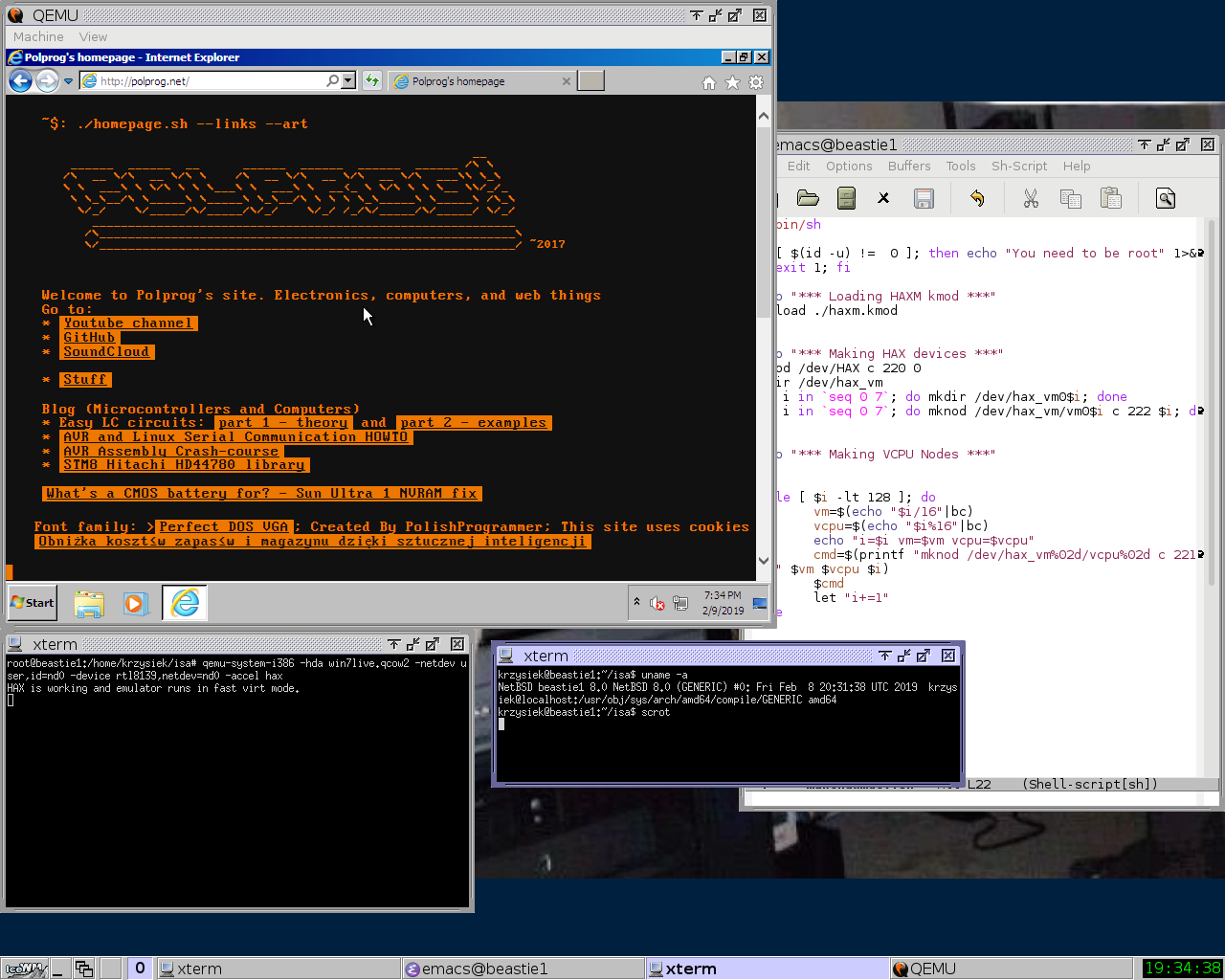 Below there are screenshots of operating systems that boot successfully for now :)

Haiku, ToaruOS and KolibriOS - thanks to nia @ !

Sytems that currently fail to run under HAXM:


We were enlightened by a different OS user, that some HAXM guest systems hanging the host kernel is a DoS attack vector :D